Got the first batch of Russians done. This batch consist most of the combat regiments for a tank division. 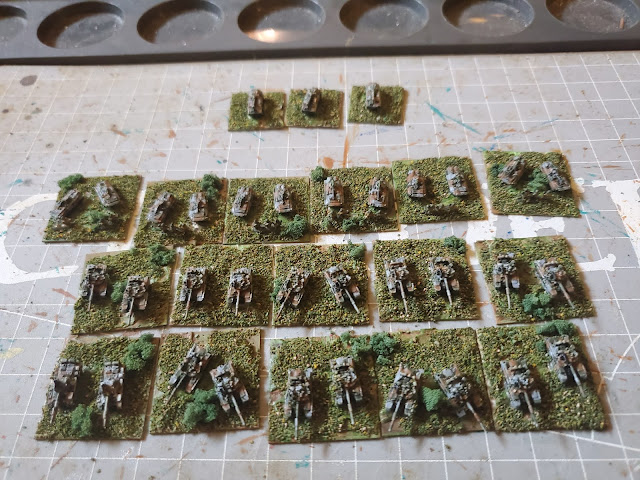 Now I'm waiting for all the ash and trash to arrive.

What a crap year. I've been working on a schedule that hasn't allowed me to do much of anything, gaming related. Mostly I've been trying to rebuild my database on computer, as I can take my laptop to work. However things are starting to look up and I've finally manage to get some new painting done. I've start on some units for a modern version of Megablitz. To this end, I decided to go with 3mm, as this will allow me to try some new things. So here's my first unit, the Canadian 4th Mechanized Brigade 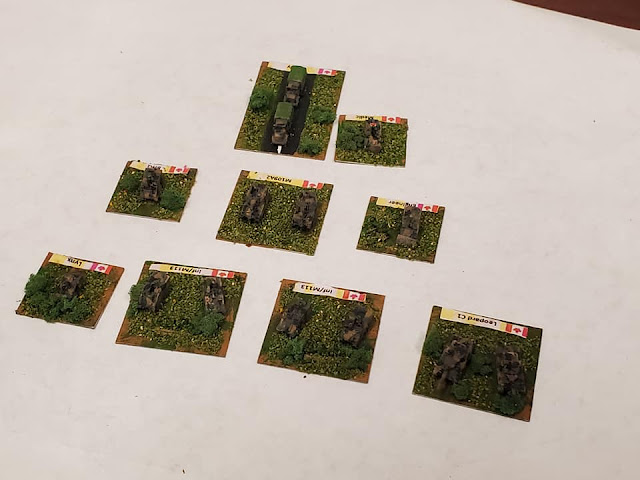 I decided to base my modern forces around 1985, the era I grew up in. In the front row are the main combat units; the recon company, 3rd Royal Canadian Regiment, 1st/22nd Infantry Regiment, and the Royal Canadian Dragoons Armor regiment. The next row has the Combat Support units; the brigade HQ, Royal Canadian Horse Artillery Regiment, and 4th Combat Engineer "Regiment" (Actually a company size formation). Finally in the back we have the Combat Service Support units, a supply column and medical unit.
I'll be using this 3mm scale to try out new some ideas for Megablitz. I've got some Russians on the way so hopefully I'll get those done soon. My goal is to have a small game ready by the end of the year.
Posted by JLee118 at 6:37 PM 3 comments:

I know I've been off for a while. My Laptop went tits up back in December, and it taken me a while to get a replacement. Not only did I lose the computer but all the data in it. House rules, planned scenarios, data list for various games, my collection of TOEs and OOBs. Its going to take while to replace all that. Anyway, on to funnier things. This weekend I managed to go to Rapier down in Jacksonville for at least part of Saturday. Like idiot I didn't get any pictures of the other games that were going on there and there were some pretty nice ones. I did manage to get pictures of the one game I was able to get in on.

I couldn't stay for the whole game, but I felt good when I pulled out. We had inflected casualties on all three of the Pact units. Only the East German T-72 battalion still had most of it's movers and we still had two fully intact units to face them. Finally I was able to get a little loot.

Happy Thanksgiving everyone! I hope you a good time where ever you.are. I'm hoping to do a special Megablitz game for the 75th anniversary of Bastogne. So I've been spending the past few weeks painting up new units. Here are a few of the new Germans. First the Panzer Lehr Division, which I painted up a couple of weeks ago.

Last week I painted up 26th Volksgrenadier Division. Buying some winter German infantry from H&R I decided to make them my first true winter unit (I'll flock the Panzer lehr for NW Europe after the game). I'll probably also use it as a regular infantry unit in early war scenarios, as like most Volksgrenadier division the 26th was originally an Infantry division.


I now have all the major units I need. Unfortunately I don't have any pictures of the 101st Airborne. I'll try to post them up next week.

Managed to do some painting over the weekend. This time I decided to paint some aircraft for late war eastern front. First off we have some new German fighters. A Me109G and Fw190.


Next we have a Ju87G with autocannons and a Fw189 reconnaissance plane.

Of course these aircraft need someone to fight, so I also added to my Red Airforce. First up is the fighters, an La-5 and Yak-9.

For Ground Support we have a IL-2M and Pe-2 light bomber. Also in the background is a Po-2 bi-plane. A versatile little craft, they where used as light bombers, or reconnaissance planes.

That's the new stuff for now. A few more odds and Ends and I'll be ready for a another game of Megablitz. I'm not sure what I'll work on next.

I actually got some painting done this month. For some up coming games of Megablitz I decided I needed some army level artillery as well as other assets. So I just came up with this Monstrosity, the 6th Breakthrough Artillery Corps. 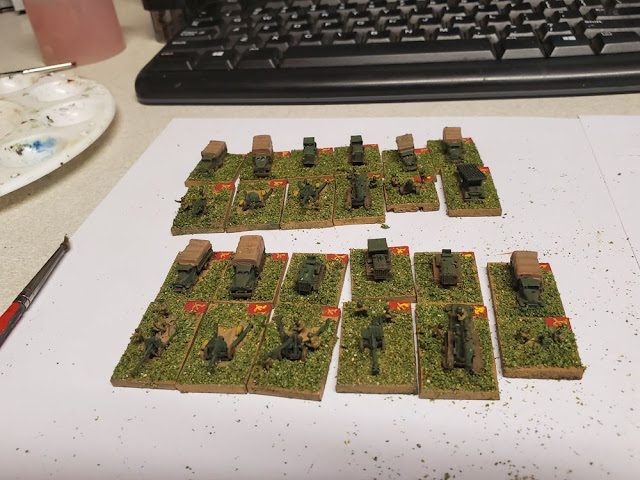 This unit is based on one that fought in the battle of Berlin and will be providing army level artillery for the forseeable future. The corps is made up of two breakthrough artillery division. First is the 2nd Breakthrough Artillery Division. 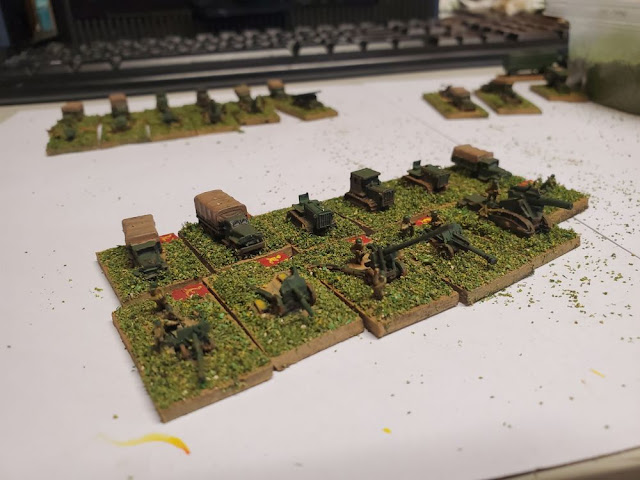 In the first half of the division we have the 20th Light Artillery Brigade, 10th Guards Howitzer Brigade, and the 16th Guards Gun Brigade. 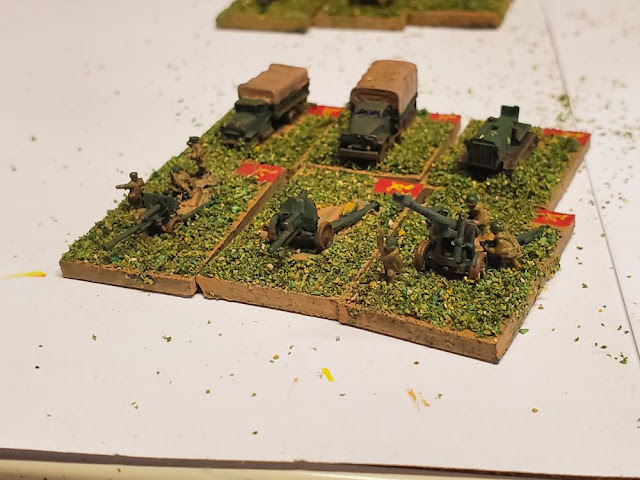 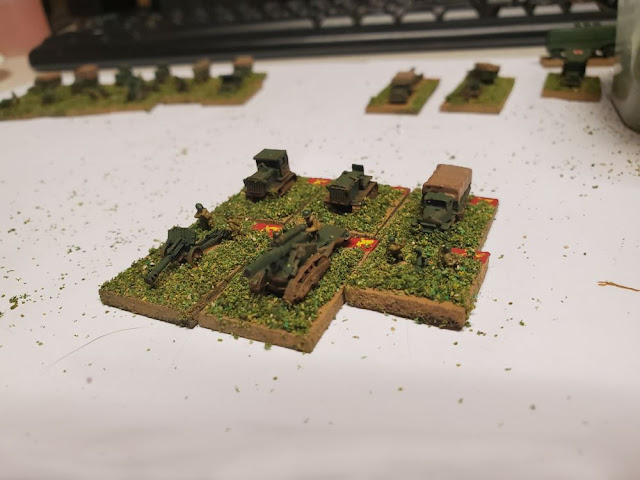 The other division is 14th Breakthrough Artillery Division. 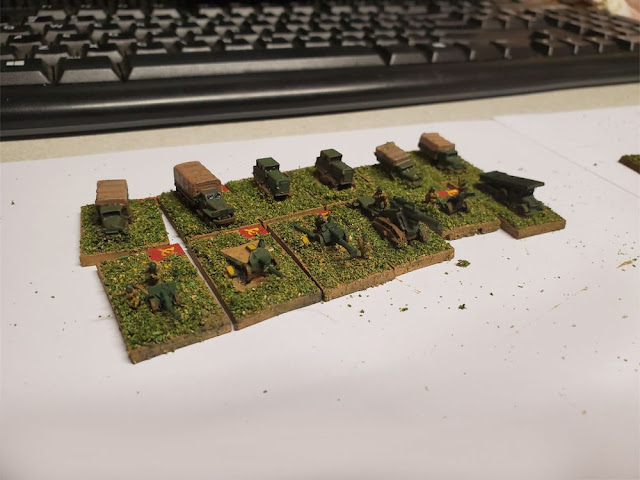 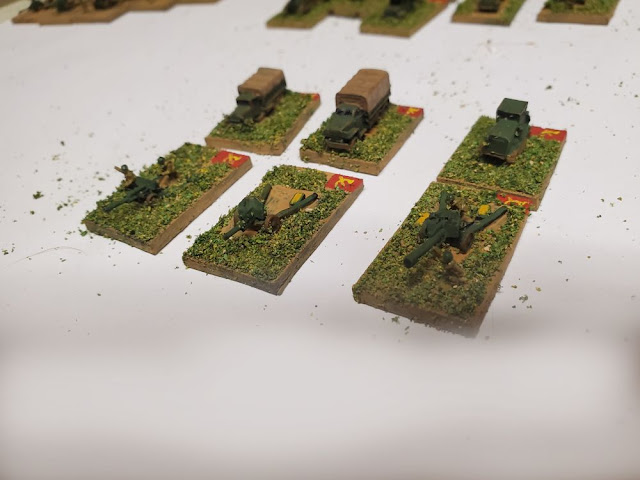 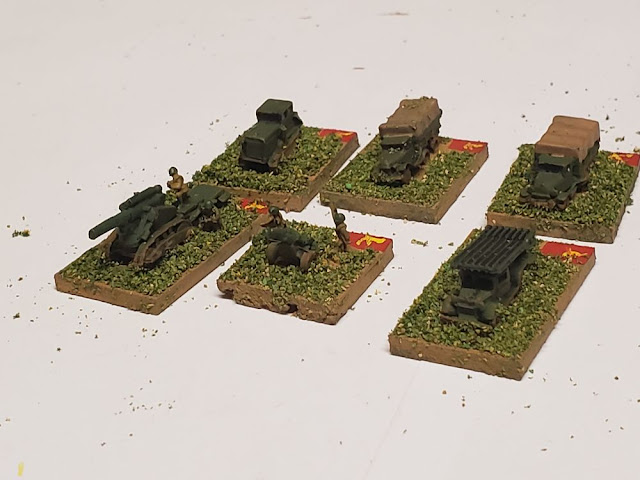 In addition to the artillery Corps I also made some other army level assets. Two Anti-aircraft artillery regiments and a medical unit. (For the horses) 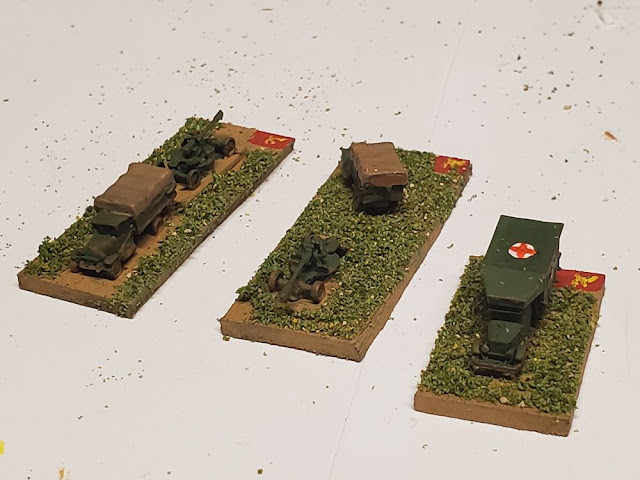 Finally while I made a couple of modern Pact units for FFT. Two upper level command vehicles. These were part of a Shapeways command set I brought for fun. They will mainly serve as possible objectives in any FFT games. 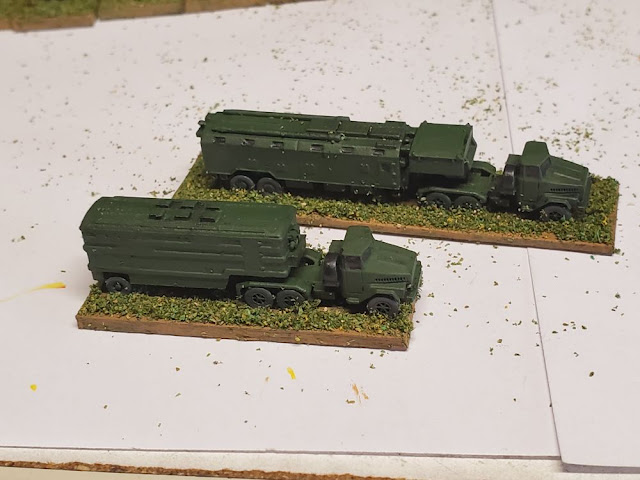 Next up I think I'll paint up some aircraft. 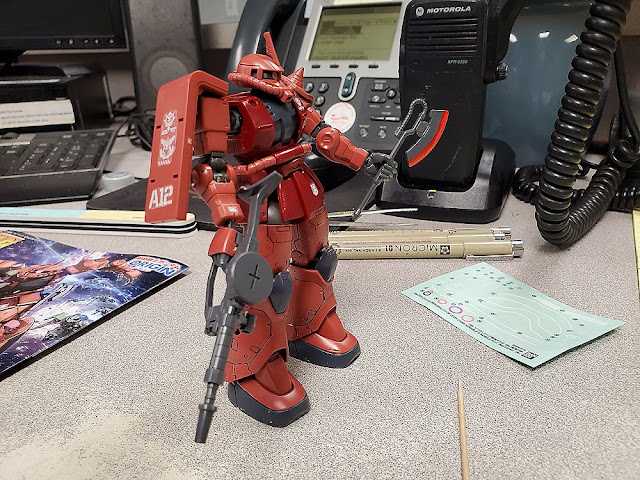 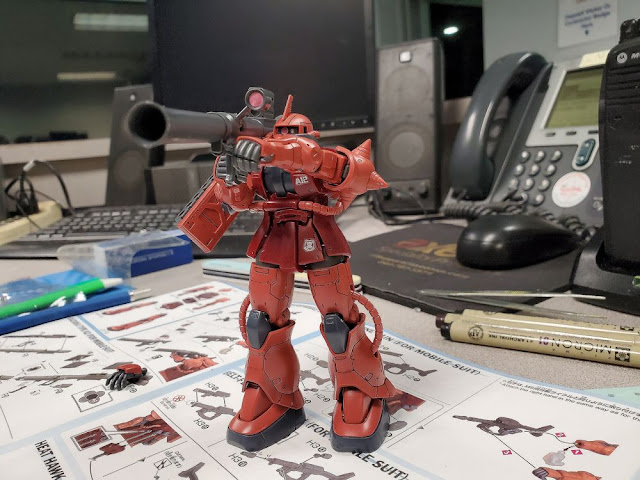 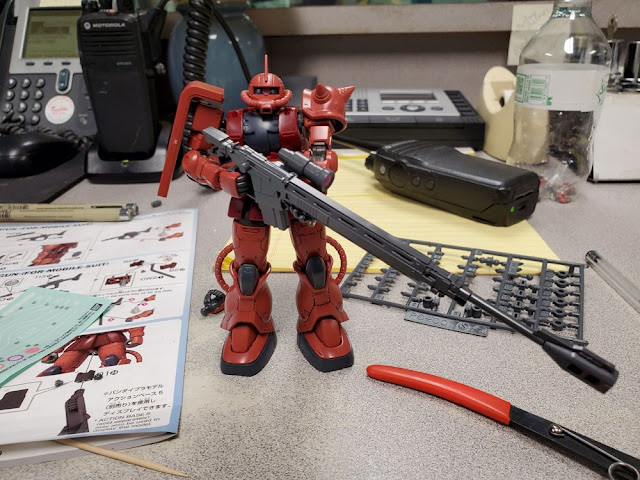