Last Sunday, me and Christian met up at Morning Star Games to play some modern naval warfare. Instead of using Shipwreck, I convinced Christian to give Harpoon a try. I decided to start out with a semple surface engagement, no aircraft and NO submarines. The scenario was from Naval Sitrip and was about a little known part of the Iran/Iraq War. During the Iran/Iraq War in addition to attacking US and neutral ships, the Iranians also harassed Soviet vessels providing supplies to Iraq. Christian played the Soviets, he had a Kashin DDG and was escorting a merchant through the gulf. I was the Iranians with a Saam FF. Here's a picture of the initial deployment.


We spent the first two intermediate turns, (each representing 30 minutes) closing with each other and detecting with radars. Eventually I pulled along side the two units just in SSM range. 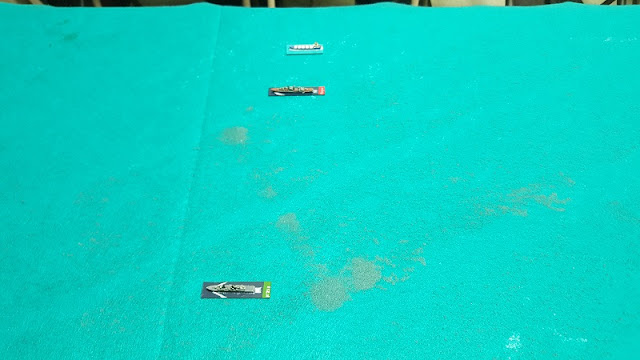 I then fired two Sea Killer II SSMs at the freighter. The Sea Killers had an old command guidance system that required me to guide them all the way to target. I had only two directors so I could only fire and control two missiles. Christian tried to shot the missiles down with his SA-N-1 SAMs, but they were not effective against the surface skimmers. The first two missiles hit the freighter causing a large amount of damage, but no criticals, damn. 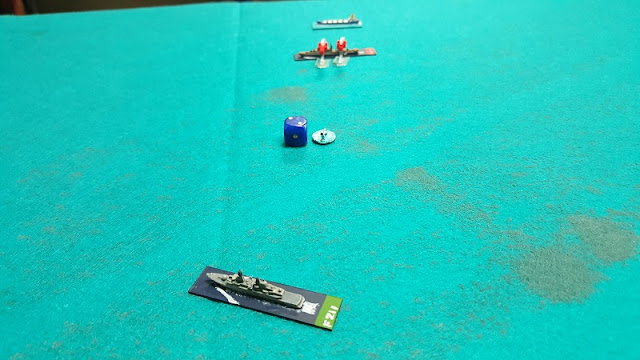 I then fired two more Sea Killers at the merchant. The range had closed somewhat and Christian had decided to change tactics, firing some of his SA-N-1 Goa missiles at my ship. The SAMs air-burst showering my ship with fragments. While doing little to sink my ship they did destroy several of my sensors and weapons, including one of my directors, which caused one of the Sea Killers to self destructs. The other missile hit the target and although not causing as much damage as the double hit before, did produce a few criticals. The missile caused damage to the bridge and also hit one of the holds that was holding Ammo. Unfortunately, despite having destroy 90% of the ammo in the hold there was no explosion just a small fire that Christian would get under control.


Christian then fired more SA-N-1s at my ship taking out the rest of my sensors. With me having no more weapons to fight I withdrew from the battlefield. Still having escort the damage freighter, Christian did not pursue. In the end we both declared the battle a draw. I had done more damage to Russians than allowed but was just shy of the 50% required by my own victory conditions.
Harpoon is a lot more complex than shipwreck. But with some pre-game planning can go quick enough, and it has a lot of good detail. I hope to play more of it in the future.
Posted by JLee118 at 9:50 AM No comments:

It is with great sadness that I say goodbye to my Dell XPS M1530 laptop computer, whose screen died several days ago. 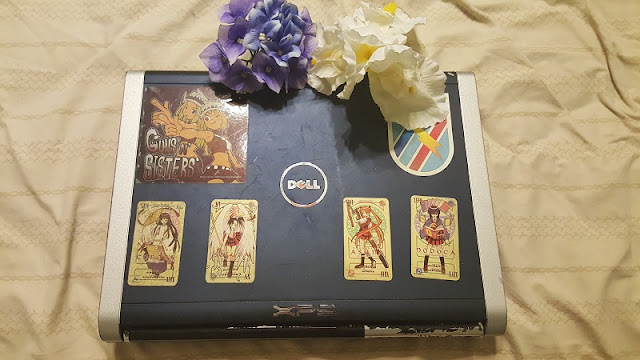 It gave me some of the best years of its life, including one year in Afghanistan. Till now every post on this blog was done on this machine. Later today I'll be taking it to my friend Christian to have its guts removed  and see if any of the files can be recovered.