If a tree falls down on the table...

As I've been getting ready to do some FFT, I've realized that I had a decided shortage of 6mm trees. I had made some a few years back but I don't know were they've gone and they weren't to good either. Thus I decided to make some new trees using some idea's I got from Bish's 3mm blog, only supersized.

First I started with a humble penny and glued a drywall nail to it. 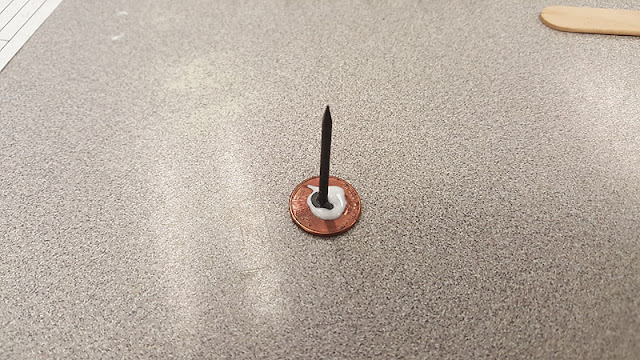 I then spray painted them ultra flat brown. 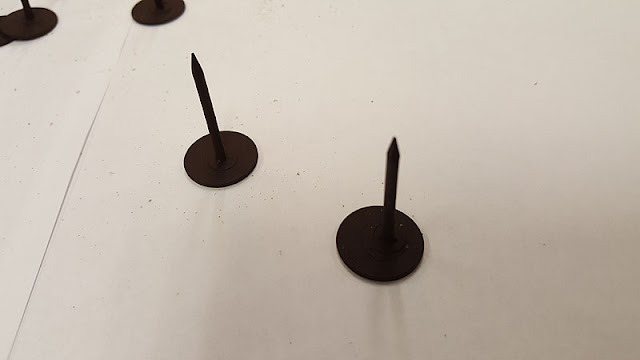 I then flocked the bases.


Finally I added a clump of Woodland Scenic's Foliage Clusters. Note this is not to be confused with their clumped foliage, as this stuff is MUCH denser. I tried using the clumped stuff for a couple of trees but it didn't work out. I'll probably use the clumped foliage for the bush markers I'll need to make. 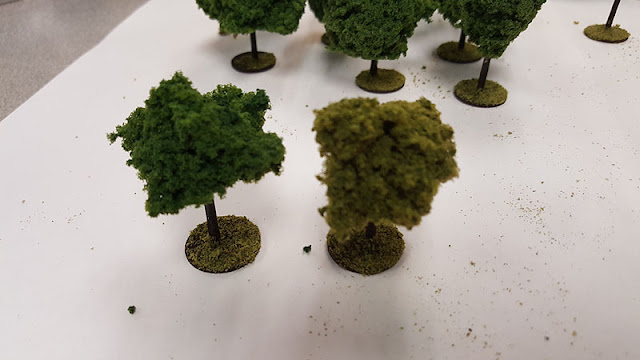 In all I was able to make about 48 trees. Which should give a few good woods. 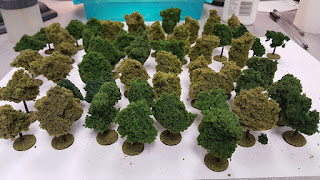 I'm going to start working on my next modern unit this week. I'm also going to see if I can get Christian to try out Harpoon some time. 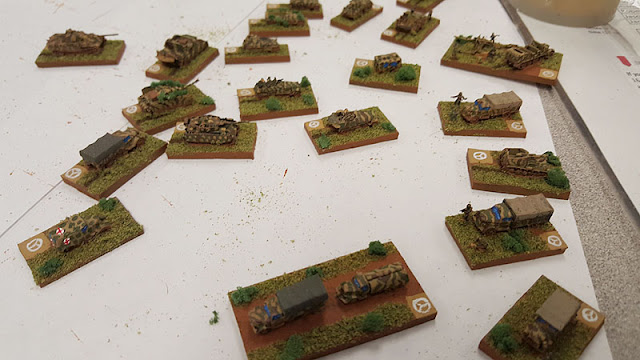 Now for some of the individual units. First up we have the division's armor, the 29th panzer regiment and 2nd AT Battalion. This unit gave me a bit of trouble. The StuG III was a older GHQ mold without side skirts. So I made my own. They went on uneven, but the extra camouflage even things out. Then I had the barrel of the Panther snap off so I quickly had to replace it. 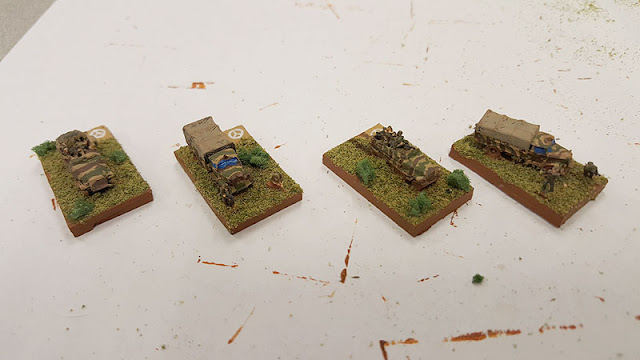 For reconnaissance I have the 2nd Recon Battalion with a selection of light armored vehicles, mainly SdKfz 250 half-tracks. 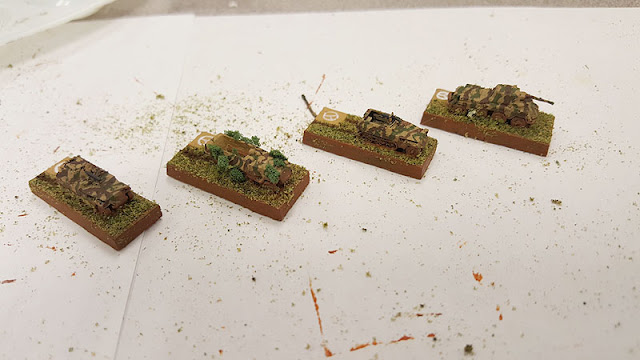 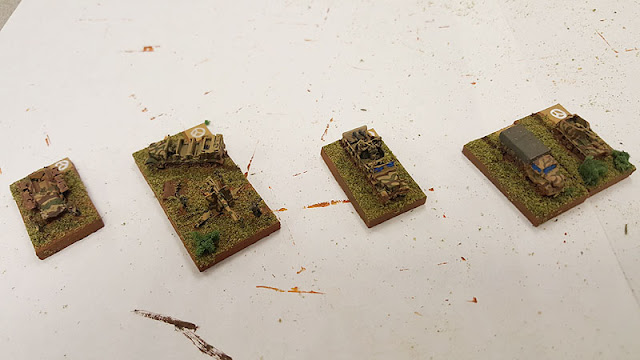 Finally we have the combat support units. The 2nd medical battalion being followed by the maintenance companies, the 2nd supply battalion, and the division HQ with the 2nd signal battalion in the trailer behind him. 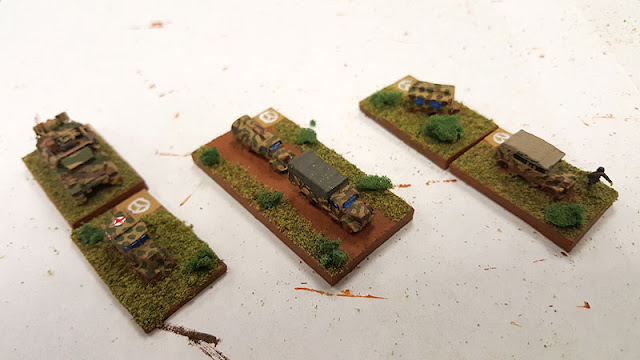 Unfortunately, I didn't get a picture of the unit all together in a nice formation, only the gaggle pictured up above. I'm not sure what I'm going to work on this coming week. Either a new modern unit or some terrain.

Last Sunday I drove down to Brunswick to play Star Fleet Battles with Christian, Mike, and David at the McDonald's. The scenario was a free for all between several Orion pirates. The objective was to drop boarding parties on to the wreckage of the Titanic IV. Each ships had a different layout  and we each gave our ships a name. The battle raider I commanded was named Battle Wagon. David had the light raider Blackhole Sun, Mike commanded a heavy raider called Rattlesnake, and Christian named his medium raider The :Last Elvis. Here was the initial setup.

On the first turn most every was going at a conservative speed of around 15-18. I tore through the stars at 27. This would allow me to arrive at the wreck first. Right off the bat David started firing drones at me and we exchanged in a slight missile duel. I then arrived at the wreck quickly dropped off 3 boarding parties then turned away. Meanwhile Mike fired a plasma Torpedo at me. 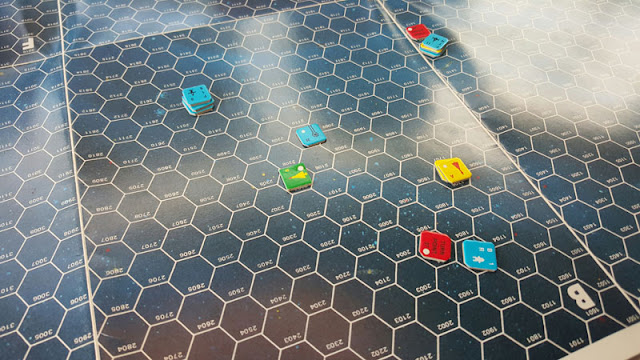 At the beginning of the next turn I deployed my stinger 2 fighter. As Both mike and Christian started drop boarding parties. Mike also tried to use his shuttle to drop off troops but it was quickly shot down. 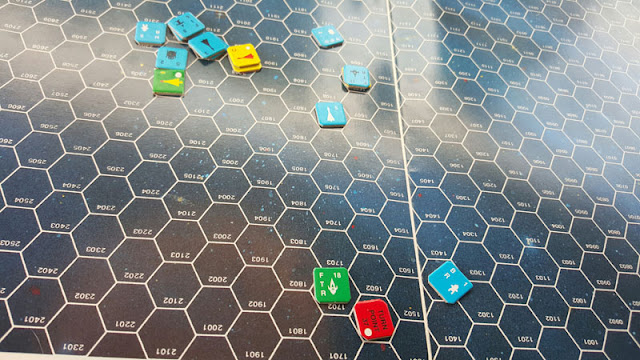 My stinger 2 fighter then engaged Davids fighters. I manage to destroy his F-18, but then suffer crippling damage from his Z-V fighter. David then tractored my fighter. No wanting him to get my stuff I used a phaser to destroy the fighter myself. 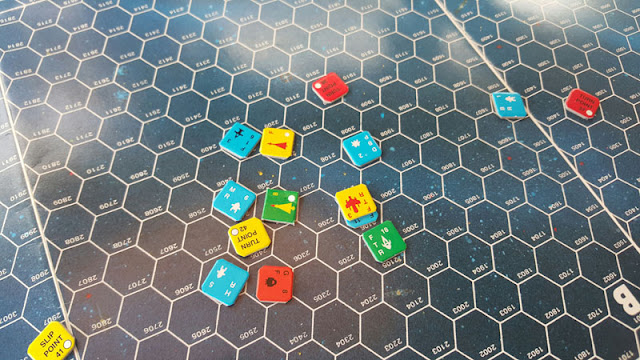 I then found myself in trouble with Christian closing on my aft along with his fight and a plasma torpedo. I used my rear phasers on the torpedo then did a high energy turn to bring my strongest shield to bare. I ended up losing the shield and suffered 10 internal hits. 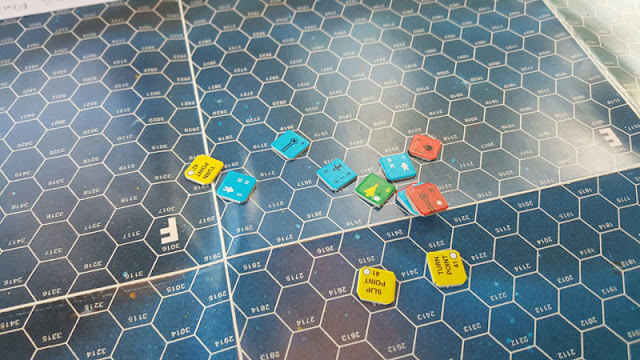 As the game ended for the day, my ship lost another shield and suffered 10 more internals. We plan to continue this game next month. Despite having lost two shields and suffering 20 internals I still feel pretty good about the situation. Most of the internals were superficial. I still have all my phasers, a drone rack, and a photon torpedo. My only worry is the damage to my scanners and that I was not able to reinforce the boarding parties I put on. Which is what I was planning for the next turn. 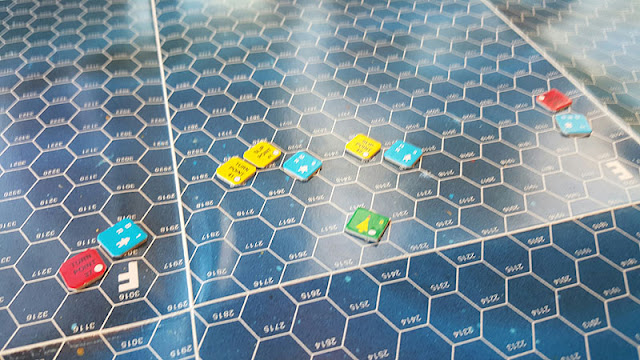 Anyway we should be concluding this next month after labor day. Tomorrow I'll be putting up the picks of my new Megablitz unit.
Posted by JLee118 at 12:50 PM No comments:

Last week I decided to work on some of my Modern aircraft for Angola. First up for the South Africans we have a Canberra Bomber.


Next we have a South African Buccaneer S.50.


Finally for my Angolan forces a MiG-17 fighter.


Anyway I hope to use these in a scenario soon. This Sunday, I'll be going to play some Starfleet Battles. I also Hope to have another Megablitz unit done next week.