Yet more ship's for shipwreck

This week I got to finish more ships for the early cold war scenario, I've been planning to do. The first were some Navwar Foxtrot class submarines and Aircraft by CAP Airo.


To back the Soviets up I've painted up some long range aircraft.


For NATO, I have more ships for the Dutch navy. All of these were by Navwar.

Last week I was able to get some more ships painted. I'm planning to use these ships for an early coldwar scenario, so most of them date back to the fifties and sixties. First up is some more ships for my Dutch navy. Two Friesland class destroyers and the light carrier Karel Doorman.
﻿﻿﻿﻿
The Karel Doormans air group consisted of S-2 Trackers and Seabat Helicopters. For the Seabats I'll be using Wessex helicopters as a substitute. I only have three S-2s so I also painted some S-3 vikings to stand in.﻿﻿﻿ 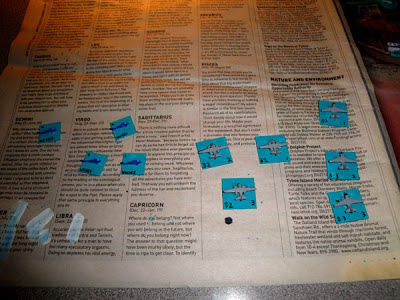 Finally I also painted some more early Soviets. This time a pair of Kotlin class destroyers. Both the Friesland and Kotlins are old school destroyers mostly equipped with just guns and depth charges. The only thing modern about them is the guided torpedoes and the Friesland don't even have that! 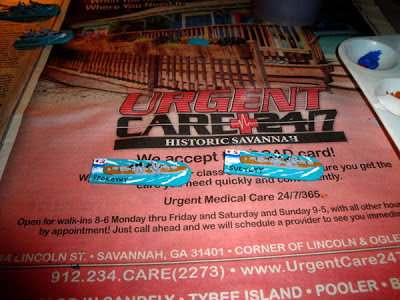 I hope to use these sometime soon.

Last Sunday Christian and I meet at Morning Star Games for another game of Shipwreck. Joining us were Joe and Michael. I decided to do the Eastern Express scenario from Harpoon Naval Review 2003. Basically the scenario was thus:


Joe played the Vietnamese and had two Polnocny B LSMs and his choice of two other ships either Tarantul I PGGs or Peyta II FFLs, he choose one of each.  I played the Indians and had two destroyers (Ranvir, a Rajput Mod class DD, and Mysore, one of the new Delhi class DDG) and two Frigates (Ganga, a Godavari class FF and Brahmaputra, a Brahmaputra class FF).  Christian and Michael, played the Chinese, they had two destroyers (a Luhu and a Luda I) and 3 Frigates (two Jainghu I and one Jaingwei I).


The first turn I had Mysore (the Delhi class DDG) brake off and join the Vietnamese. Being the best air defender in my fleet, it was to provide area air defense for the transports. The Vietnamese went slowly south. The Chinese split into two groups with the larger group head towards my main group. The other group headed due west on an intercept coarse with the Vietnamese. Everyone who had them kicked out at least one helicopter for detection purposes.

For several turns we just moved and tried to detect each other. Then the Chinese decided that they were not going to make it in time to stop the Vietnamese from crossing the table edge. In Blatant act of Chinese Militarism, the Chinese formed into a column and launched a large missile attack with six C-802 missiles and ten HY-2 Silkworm missiles. At first thinking the missiles were aimed at my ships I knocked a couple of missiles with SA-N-1s from the Ranvir and SA-N-4s from Ganga. The missile then flew past my ships headed straight for the Vietnamese convoy. The Mysore took several more with its SA-N-7s, but that still left the Vietnamese dealing with 7 missiles (one aimed at the Tarantul and 3 each at each transport). Chaff managed to draw the missile off of Tarantul and onto the Peyta II, where it missed.


Things were really looking bad for the Vietnamese, with three missiles on each of its transports. Both had poor air defense and no EW or even Chaff! The three C-802 missiles slammed into the first transport sending it to the bottom. But then the Chinese’ cheap Styx knockoffs all missed their target!


The next turn the Tarantul broke off to engage the Chinese ships that hadn’t fired yet. I moved my ships into a position where I could shot down missiles from the same Chinese group. The northern Chinese group went into a seeming pursuit formation, while debating wither or not to fire on my ships. The Tarantul launched its four SS-N-2C missiles at the Quingdao (the Luhu DD) with the Quingdao launched eight C-801 missiles at the Tarantul and remaining transport.


The next turn the Vietnamese Tarantul turned to the northern Chinese group. The northern group engaged the patrol boat with gun fire, recklessly firing over the Indian ships, sinking it. The Shaoxing, one of the Jainghu I FF, fired its missiles at the transports in a last ditch effort. However the Mysore with its six missiles directors was easily able to deal with the threat.

What Joe did right: Keeping the transports close to the Mysore, allowing the Mysore’s area defenses to shoot down any incoming attacks.


What Joe did wrong: The Tarantuls suicidal attack against the Chinese wasn’t necessary. At the very least he should have picked both Tarantuls, so that he would have more missiles at his disposal.

What I did right: Braking off Mysore to defend the transports with it area air defense.


What I did wrong: I may have been able to position the Mysore slightly further away to allow it to shot twice at incoming missiles.

What Christian and Michael did right: Good discipline in not shooting at any of the Indian vessels. This kept me from firing on the Chinese, which was good for them, especially considering that Brahmaputra and Mysore carried a combined 32 SS-N-25 missiles!


What Christian and Michael did wrong: Not concentrating their missile in the second strike. If they had fired all their missiles at the second transport there’s a good chance they would have been able to sink it. Instead they fired them piecemeal allowing me to easily shoot them down.

These are couple of M-ATVs I painted up for Force on Force. These were actually science fiction minitures from Rebel Minitures, but they were easy enough to convert to a passible M-ATV. All that really needed to be done was remove several of the vents that cover the model. I then added a camo net screne on top of the gunners station. 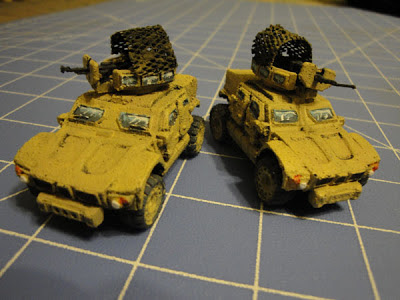 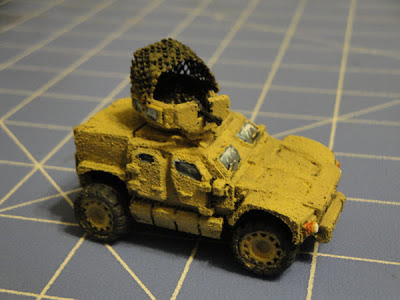 Not exactly my best pant job. Part of it was due to the primer, which came out  all grainny.
Posted by JLee118 at 2:57 PM No comments:

In addition to playing Ship Wreck Last Week I also managed to get some painting done. These ships were actually done before the game, but I wanted to get the ARR for the game up first. Anyway here are all the ships together. 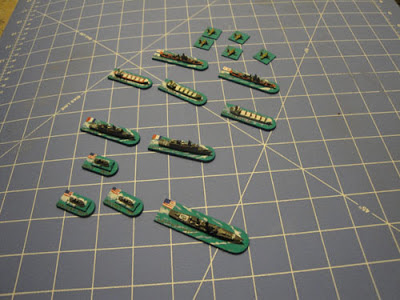 For the Russians I got a mix of old and new. I pair of Navwar Krumpy class destroyers, some of the first missile armed ships the Russians built. I hope to us them in some early cold war games. With them a group of Cap Airo  Modern Su-25s. 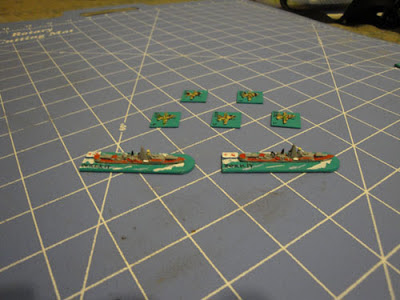 Next for the French a pair of modern La Fayette class frigates, also by Nav War. 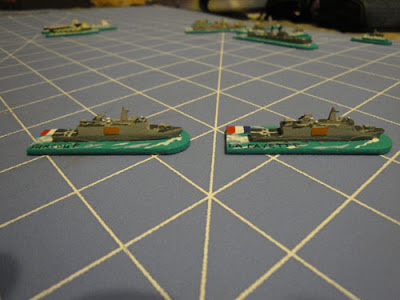 Now for the US I got a Belknap class cruiser and three Pegasus class PHM. It's a petty that the small missile  boat never caught with the Navy. The cruiser is Nav War, while the PHMs are Skytrix. 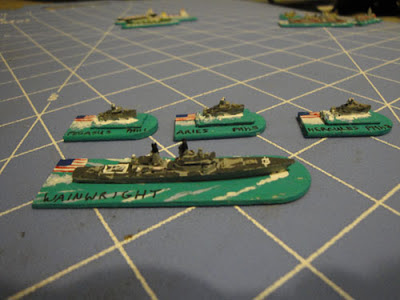 Finally I have three new bulk carriers for my merchant fleet all from skytrix. 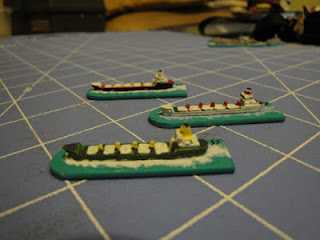 Hopefully I'll be able to us them soon.