As you probably know, hurricane Mathew hit the Southeast last weekend. I went to Springfield with my dad and sister. A family friend has a place up there where we stayed during the storm. We were still pretty close but came through, although my sister lost two cats. They took off when we arrived at Springfield and their status is unknown. Oh well, she had five too many anyway.
I came back home Sunday to find this... 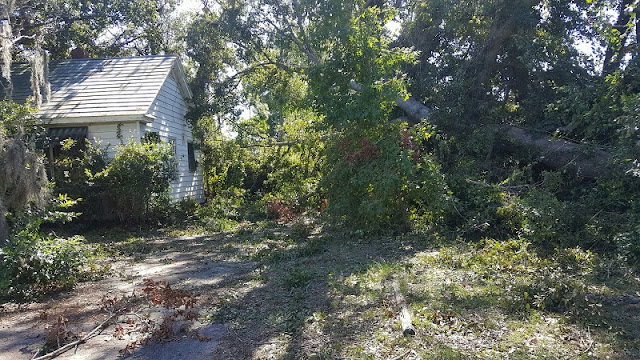 Fortunately no damage was done. This is the second time a large tree has fallen next to my house and missed. Now I just need to figure out how to get rid of it. I got my power back Monday and luckily the movie I brought advance tickets for was still playing. So I still got to see Shin Godzilla. A great movie, you should see it.

I know its been a long time since I've updated. My new work schedule makes it hard for me to get any gaming done. I have been working on some new terrain pieces. These are taking a lot more time than I thought they would but they should be worth it when I'm done. I've also started working on a set of modern naval rules. I like both Harpoon and Shipwreck, but they get bogged down if you have a lot of units on the table. I working on a set of rules that will allow me to fight very large battles with multiple ships, planes, and subs. Hopefully I'll have a workable game within a few months.
Meanwhile, I hope to go to a few conventions next year. Gnome Con of course and maybe either Siege of Augusta or Rapier. I'll have to see how much money I can get together.
Posted by JLee118 at 2:26 AM No comments: