I returned to my slow work on the IJN Tama this week. I've added some of the fittings to the hall. Next I might start adding some of the camouflage to the harder to reach areas.


In other news, I've started basing my next batch of ships for Shipwreck. These well be more early cold war designs, this time for an actual historical scenario. I'm also starting to collected up the forces I need for a HOTT army. Lastly, I'm hoping to do a Shipwreck game some time in the next couple of weeks.

Yesterday me and Christian played our first game of Megablitz. The scenario was the Gembloux Gap with the French verses the Germans. Here is a look at the map.


﻿﻿﻿
In first game turn the 4th Panzer moved down the road and attacked the Belgians in Waremme. I sent out my numerous recon elements to get a picture of what the Germans were doing. Amazingly, though battered none of the Belgian units were lost in the first turn.

﻿﻿
On the second turn I started moving my tank regiments up to engage the 4th Panzer. Once again 4th Panzer attacked Waremme, with support from the 2 dive bomber groups. This time the Belgians weren't so luck, with all of the Belgian units around Waremme being destroyed. The Germans also started to deploy units to hunt down my recon units.

On the third turn, the armor regiments clashed with 4th Panzer. They were supported by the French air force who were in turn attacked by the Luftwaffe. Fortunately I didn't lose many aircraft. Unfortunately I kept my armor units in mobile which made them less effective against the Germans.

On the forth turn I pulled the armor back to place them within range of my artillery. 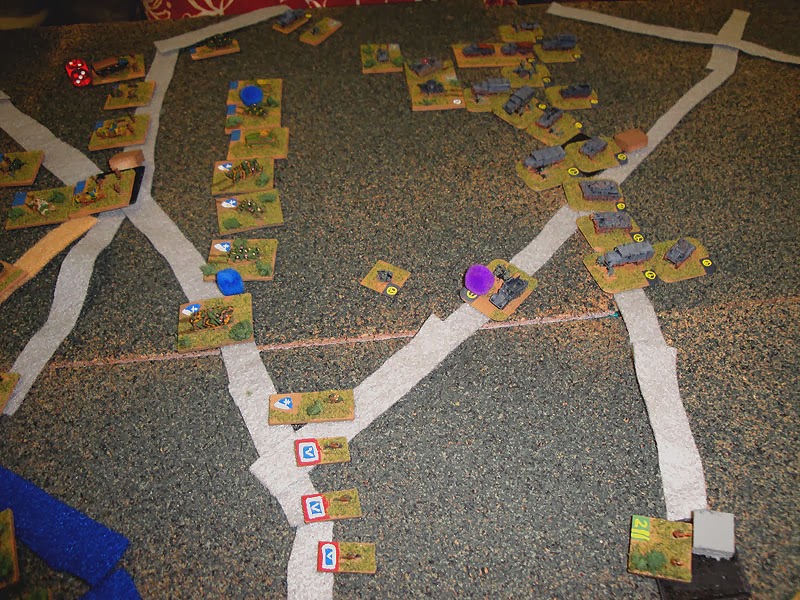 On turn five my engineers finished making fortifications for some of my infantry units. Christian attack my armor regiments, destroying several of my tank battalions, while more of 3rd Panzer started to arrive.

Turn 6 was the last turn of the first day. This saw the remainder of 3rd Panzer and the corps troops of XVI corps arriving in the NE corner. Christian launched another assault against my remaining armor battalions while also starting to attack my infantry line with dive bomber support. Despite using the last of my airplane fuel to give my units air support, the remainder of my tank battalions are destroyed. However my mechanics worked through the night and managed to bring one battalion back on line, some what.
﻿


Turn 1 of day 2 things stated to get gritty, as the Germans destroy several of my units north of Hannut. I sent the MG battalions that were attached to 2nd DLM north to launch a counter attack, but with little results. As a precaution, General Prioux pulled his headquarters back.
On turn 2 of day 2 the both the remainder 3rd DLM and 2nd DLM's infantry starts to pull back to the Dyle line allowing the Germans to overrun Hannut. The engineers blow the bridge across the off shoot rivers.
Turn 3 of day 2 saw the french force trying to reform near the Dyle line as the Germans started to by pass them in the North.
On turn 4 of day 2 I launched one last attack with the remaining infantry. While several of the German battalions were destroyed so were my remaining infantry units. At this time I decided to call it as I now only had one battalion of engineers available to hold Gembloux and the Germans were about to unleash the full fury of their Luftwaffe. My remaining combat units (an engineer battalion and two artillery regiments) would not be able to get there to help, thus this was a victory for the Germans.
﻿

Over all it was a fun game, some of the things I could have done better:
Used attack orders during the first battle.
Pulled back the infantry units of 2nd DLM sooner or maybe placing the one of the other battalions behind the Dyle line.

I also want to get some better terrain. Either some 3mm buildings or maybe some Monopoly houses. The cork tiles I was using appeared bumpy, but I think it was because of the felt cloth I was using to keep them in place. I hope to return to this someday, with an east front of desert scenario.
Posted by JLee118 at 2:56 PM 7 comments:

Things are going ever so slowly on the Tama. I've started some of the initial painting. Hopefully I'll get more done later. But I'm going to be spending the next few days getting things ready for a game this Sunday. Anyway here are a few pictures.

As I stated above I'm planning to do a game this Sunday, so I should have some better photos for you next week.
Posted by JLee118 at 11:02 AM No comments:

Well its been a month since I've last updated and what have I accomplished...

I've been adjusting to a new work schedule, so I haven't had time to do much building or painting. I have been reading some however and this is the latest book I've started.

﻿
﻿ A current affairs book written in 1972 before the end of the Cold War, the Soviet Invasion of Afghanistan, or even the Yom Kippur War, its an interesting look at how fearful the Western powers were of the Soviet Union and why. It paints a very different picture of the Soviet military from what we know now or even what we knew in the 1980s, seeing it as a overpowering and superior force. Among some of the arguments was the fact that the Soviet Navy was made up almost entirely of new ships and subs while over half the US fleet dated back to WWII. Of course we now know that the ships were built in a rush and that the much vaunted Soviet submarine force rode on the edge of safety, suffering numerous accidents and heavy loss of life. It also talks of the threats of China and India with its 'new' ties to Russia, among other countries.

That's what I'm reading now. I hope to get some more modelling, painting, and gaming done later this week.﻿